An argument for communication…

I apologize that my rant against the health club and its lack of communication — which began in your hearing in the parking lot — did not produce the promised blog post. It’s Connie’s fault. She made me deal with the communication issue directly. (Plus, as you know, the inability to shower at the health club — again, although this time was unplanned — meant taking more time to do so at work, which took time away from my writing. OK, yes, this is a mini-rant.) Dealing with this like a mature adult took all the fun out of it. (Again, I blame Connie.)

Here’s the back story:

Earlier this year, when the health club opened the new and improved women’s locker room, we women oohed and aahed over some of the features — but shook our heads practically in unison when we saw the glazed, white tile floor.

The club didn’t resort to “slippery when wet” signs, however, not as if those would have annulled any pursuant lawsuit anyway. Instead of directly addressing what I would call the proverbial “elephant in the room,” the club attempted “work arounds.” Handicapped rails along the walls leading from the shower area to the lockers and benches. A variety of mats. “Dry off before entering the locker room” from the pool area signs (which were ignored because who wants to dry off chlorine water and then use the same towel after showering?). And “Please dry off completely for your own safety” signs in the showers.

A few weeks before my outrage at my (truly) beloved health club’s lack of communication, this sign appeared near the entryway to both the pool and the ladies locker room: 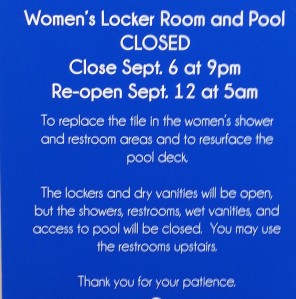 Dare I say the sign ONLY appeared in those two places? I saw no mention of the closure at the front desk, no email or newsletter or even announcement on the club’s web page or Facebook page.

Regular users of the pool and the locker room saw the signs and made alternate plans. But the very week of the tile demolition and restoration, one of our friends who uses neither on a regular basis announced she was going to go swim.

“No, you aren’t,” my friend Connie said. “The pool is closed this week.”

Exactly. Who knew? Some, but not all.

On Monday morning, the 12th, at 6 a.m., I walked into the health club with a bag slung over one shoulder, another bag in hand, my hanging dress tucked under my arm, and my key fob membership card at the ready for check-in.

“Oh, I’m sorry to have to tell you this,” the receptionist said, “but the shower area is still closed.”

I abruptly turned around, returned my bags to my car, grabbed my cell phone and went back inside to shoot photos for the blog post that would soon (actually, months later) erupt. The first photo, below, was incorrect. I arrived at 6 a.m., and the locker room was closed (and rejuvination? Someone’s spelling needs a little bit of rejuvenating): 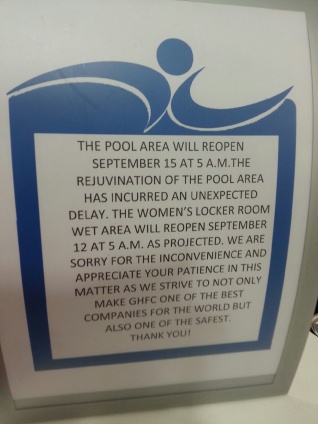 While I was in the parking lot, returning my bags and retrieving my cell phone, I vented a bit — in Ken’s and Prince’s hearing. I was incensed at the lack of communication. Delays in construction? Certainly understandable — and to be expected. But not communicating? Not acceptable.

I was one of the lucky ones. My workplace has showers, so I was only slightly inconvenienced by the surprise no shower. Others simply had to go home, go to work sweaty, or make their way to the women’s center a couple miles away to shower there.

I entered the locker area and saw the shower area blocked off by a wall of black plastic and another sign:

I vented to my workout partner and a couple friends, the guys in the parking lot, the staff on the floor, the receptionist, and then I worked out and got sweaty enough for a shower — at work.

After my shower, I had a few minutes before work to begin typing out my frustration. But I noticed my cell phone blinking, indicating I had a message — an email from Connie. She had forwarded an email — communicating the whole construction and delay fiasco — from the health club.

I sent a reply to Connie.

“Dammit. Who are they sending this email to? I am not on the favored list.”

(Disclaimer: I don’t normally cuss, and this isn’t the correct spelling of the sounds-like cuss word, and Connie knew I was overexpressing myself to be silly.)

In Connie’s effort to be helpful, she replied with, “Try sending an email to [two different email addresses] and request to be put on the mailing list.”

To which I said:

“I prefer to grumble and complain via blogging. … :)”

To which she replied:

“Then you should put them on your blog recipient list so they can see how frustrating some of their policies are to certain members!!”

And then moments later I got an email from one of the email addresses at the health club asking me if I’d like to be put on the email list.

Because Connie — in her effort to be helpful — actually typed the email addresses she suggested into the address field to confirm them… and forgot to erase them.

Which was why I was forced to act like an adult and C.O.M.M.U.N.I.C.A.T.E. Nicely. And not simply write a blog post expressing my frustration and hope that it would go viral and get read by someone at the health club who actually would do something to improve communication.

Because my frustration did get read by someone at the health club (who saw my uncharacteristic “dammit”). And that person added me to both the email and the text message list. I’ve been getting helpful updates ever since.

Which is a great argument for communication.

And not just with Ken and Prince in the parking lot. Or Connie and friends as we work out. Or the general public who read my blog. But with “to whom it may concern.” It’s kind of effective, doing that, as the health club has determined as well.

So, though it was embarrassing, I am thankful for Connie’s email efforts.

(And no more cussing or fake cussing for me. My former students will laugh, since I scolded them forever about even “substitute words” for cuss words. Shame, shame, everybody knows your name, Sara.)

4 responses to “An argument for communication…”