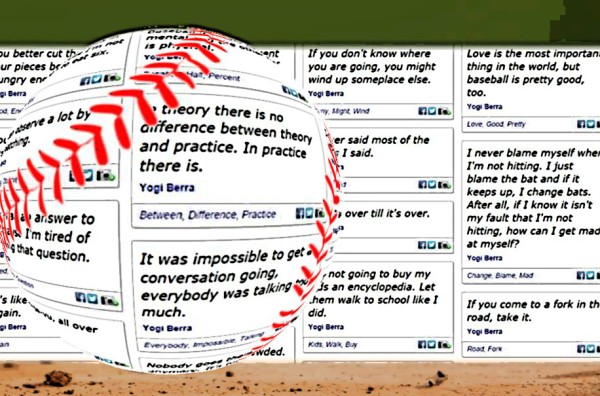 That may be the first time I have typed that term of endearment, occasionally bestowed on me (and likely many other Saras or Sarahs the world over). But it never stuck. One of my nephews, when he was learning to talk, called me “S’ra,” which his mother then affectionately used for me at times. One of my nieces called me “ReeRa” before she could pronounce my name. But no nickname ever stuck.

Certainly no nickname that included “Yogi.”

That was reserved for baseball player Yogi Berra (and the cartoon character Yogi Bear, which led to a defamation lawsuit against creators Hanna-Barbera, later dropped when the producers declared the name similarity a coincidence. I have a niece named Hannah Barbara, just in case the producers want to file a suit against her.)

Yogi Berra, who played for the New York Yankees for nearly two decades, was born Lawrence Peter Berra but was nicknamed Yogi because he sat like a yogi while waiting to bat or after losing a game. Many consider him to be the best catcher ever, and he also had amazing stats out in the field and at bat. After playing ball from 1946-1965 and spending time coaching, Berra was elected to the Baseball Hall of Fame in 1972.  Since Yogi played his last game of baseball before I was born, I admit I was more familiar with Yogi Bear than Yogi Berra, but my Bing commercial moment during yoga class this week — and the subsequent search that followed — has left me fascinated with this player.

This was my computer search engine overloaded brain at work during yoga (and, yes, I know I am supposed to be “completely present” and a mere spectator of those thoughts when practicing yoga). My train of thought:

I finished the class, as always happy that I did. But I also was happy it was over.  I left, feeling as if I worked hard. Really hard. I left, knowing that my favorite part was the relaxation at the very end…

Don’t get me wrong. I am happy to have the opportunity to take yoga. I know it has been the saving grace for my back, which hates sitting in a chair for eight hours a day. I just hate the mad rush from work to get to class on time and then the abrupt switch from madness to stillness. I hate spending ten minutes trying to breathe correctly; my nose doesn’t want to cooperate and makes me feel I will suffocate if limited to nose breaths. I also hate feeling as if I am the most-challenged member of the class. And I hate feeling trapped — but knowing how loud the heavy door is makes me certain I never want to try to escape class early. I hate feeling I am going to drown — when my allergies are in acute mode and our poses take us upside down. I hate being told “Now, go the opposite direction” or “Cross your arms [or legs, or fingers] the opposite way,” and not remembering which way I’d just done.  I hate the serious looks I get from the teacher, or the “This may be as far as you can go today” statement with a meaningful glance at me while she moves into higher level poses with the other students…

And, yet, I return, class after class.

That is a saying I’d heard from a variety of people trying to be funny through the years, but I never knew until after yoga class that the quote is attributed to Yogi Berra.  Quite a coincidence that both of my trains of thought led to this man. Yoga. Yogi. Yogi Bear. Yogi Berra. And his quote; I now realize I know many of his, though I didn’t associate them with the author. Though the famous baseball player only completed eighth grade, he was known for his zany sayings, and reading them makes me wish I were still teaching literary terms to my English classes. For instance, Berra’s quotes aptly demonstrate:

Much of what Yogi said, besides lending itself to teaching, lends itself to life. Reading what he said makes me smile because his famous quotes seem oxymoronic or simply silly, and yet his sayings ring true.

(That last one is rather how I feel about yoga class, by the way, and I’m quite happy when it’s over.)

You might say Yogi Berra was rather like a yogi, probably more like a Siddha guru, in that he was known for wisdom expressed in his memorable sayings. I think he was one of a kind. When I first did a search for his name, the third listing on the Google results page was Brainy Quotes; the fifth, sixth, and seventh listings were also sites exhibiting his quotes. My first inclination was to do a search on other famous ball players to see if sites with quotations was the norm. From what I can tell, it isn’t. Yogi Berra is now 89, worthy of his own museum and the attention his name still garners. He continues to share his sayings and thoughts on life in a variety of books he’s written titled after his famous quotes, and others (not just me) continue to write about him.

I have no delusions of ever earning a nickname that includes “Yogi” in it — no matter my attempts to sit and practice like one. But I’m rather glad I didn’t manage to block out my Bing-like thoughts during yoga class this week. I love baseball, I love wise, pithy sayings, and I’m glad I know the difference between Yogi Bear and Yogi Berra.

About the image at the top: I took a screenshot of Yogi Berra’s famous sayings on BrainyQuote, added a couple choice baseball images, and used Photoshop to bulge, sketch, and crop. I kind of like the result…

One response to “Sara Beara, not Yogi Berra…”