Will the real mechanic please stand up?

My only daughter was having an emergency C-section, but my oldest son was getting married and we were driving to the wedding — a calculated 11.5 hours away from the birth of my first grandchild. It set the stage for the emotional roller coaster I call, for simplicity’s sake, the Wedding Saga. Read Part 1:

I think the “Don’t Give a F***” tattoo sprawled across the sunburnt man’s chest should have made us think twice about having him work on our van. Unfortunately, I must have taken its meaning literally, and I was rather happy he wasn’t giving anything away…. But we were almost 700 miles from home, at least 60 miles from our destination, and the shimmy that drove us from Interstate 95 made us more desperate than hindsight would let us recall.

What were we thinking?

The tattooed man who greeted us at the tire place seemed friendly and knowledgeable enough. He quickly jacked up the Chevy Venture and even more quickly decided that we did not have a bad tire.

No siree. Not a bad tire at all. We had a bad bearing.

He wiggled the front left wheel to show us just how wobbly that bad bearing made our vehicle. 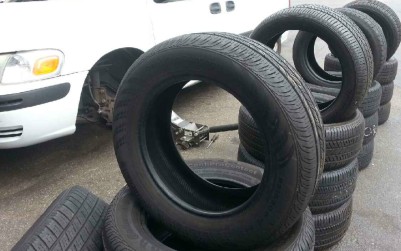 As my husband contemplated CV joints and other costly repairs and wondered where we could find a quality mechanic at this rather sparse exit, Mr. “Don’t Give a F***” relieved our minds, suggesting that he could do the repair himself. He called around for the part – got the best deal, $75 for the hub – that he could install for a mere $85 per hour. Cash.

Something about the “All Sales Final” sign and the cash only requirement should have made us think twice. Again, while hindsight seems 20-20, desperation sight called this a downright blessing. The fact that my youngest son had brought more than $200 of his pizza tips — mostly one dollar bills and coins — in a gallon-sized bag seemed downright providential.

“Praising God in a different place,” I texted my family members, who were at a variety of points along the highway heading to our mutual destination. I was thankful we hadn’t wrecked and died on the highway, happy to have landed at this tire place with a man who knew his stuff … Like pick pocketing, perhaps? Taking candy from a baby? Hitting a man when he is down? OK. Most likely nothing as sinister as those “skills”; his tragic flaw was his ability to project confidence where he should have had none. Tires he might know, but the metal thingamabobs that hold the wheels in place? Not so much. But we wouldn’t know that until later.

Our car stayed in this position too long…

My son’s tips came to the rescue.

No waiting room? No problem.

At that moment, I was happy for the abandoned car wash we could use for a waiting room out of the hot sun, happy to have a place where I could slowly count and recount dollar bills into stacks of 10 so we could more quickly pay our cash-only bill.

We thought we’d be on our merry way in an hour.

Three-and-a-half hours later, we paid the man with cash and headed directly to the Interstate in our “fixed” machine. As soon as we exited the entrance ramp to the interstate, we realized our misfortune. The van not only wasn’t repaired, it was worse, much worse. We had entered certain death on wheels – 6 p.m. traffic on I-95 just south of a big city. My husband managed to maneuver the vehicle to the next exit, and we wove our way (thank you, Google maps!) back to Mr. “Don’t Give a F***” but without much hope.

Mr. “D.G.A.F.” did not live up to his tattoo. He did, however, “give” us plenty of his choice “f***” expletive as he tightened and retightened every bolt he saw.

This time, when Mr. “D.G.A.F.” “finished” his work, my husband took the vehicle for a test drive. He returned a few minutes later with a van that not only still wobbled violently but also had a gear shift that hung limply and controlled nothing. He awkwardly wheeled the car back into position, administered the emergency brake, and leaped out.

Long story short (it was well-punctuated with a word scripted on the mechanic’s chest): It was after 7 at night and the 4 of us were stranded somewhere outside of Richmond with a mostly empty gallon-sized, Ziploc bag now devoid of dollar bills. We’d been on the road since 3:30 a.m. with the intention of arriving at our destination in the foothills of the Shenandoah Mountains by 4 p.m. Instead, our handicapped vehicle loaded to the gills with stuff was parked in a location that didn’t give us confidence anything would be left in it, should we leave it overnight. 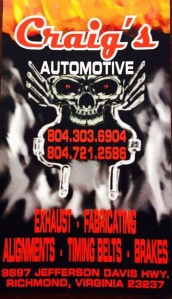 Just before the tire shop owner and his “mechanic” left for the night, the owner handed us the business card for a towing company, Craig’s Automotive. All I saw was the skull and flames on the front of the car and my skepticism – latent when I encountered Mr. “D.G.A.F.” – awakened in full force. I was OK with towing, but when Mr. Skull Afire told my phoning husband that he was a mechanic, I wanted to scream “Nooooo!” I was ready to abandon the vehicle, get a rental, and count the loss a loss.

As it turns out, my fears were unfounded. But the story of the real mechanic — a stand-up guy named Craig — will have to wait until Part 2 of the Wedding Saga.

One response to “Will the real mechanic please stand up?”