An office of one’s own…

I have always wanted my own office — at home or at work. But until today, that never happened.

I have had my own classroom — which isn’t the same. Students seem to think it is their classroom and encroach on my personal space. The school seems to think it is its classroom and schedules classes I don’t teach or meetings I don’t lead, keeping it full of people and keeping me out. It was not like having an office of my own.

Last year, I had a role in the administration at my school and shared an office with a fellow administrator — which we also shared for a variety of small meetings, as it had a table and six chairs in addition to a desk. Since I shared the space with the principal, she often used the space for conferencing with unruly students or parents. Sometimes I would begin work in the office, get all my materials spread out just so, leave for a moment — and return to find the door closed and myself not only sans office but also sans belongings. It was not a true office.

Two years ago, after one of my older sons moved from our house, we decided to remodel his bedroom into a combination office, workout space, and guest room. Since we rarely have guests and are quite good at ignoring workout equipment, I thought I would finally have an office.

Until my husband began looking for a flat-screen TV… at which point this “office combo” space became “the den” and, likewise, the most popular room in the house. It is not a true office.

In June this year, I quit teaching and began working at a tech transfer office. And today I have arrived. I have my own office.

I even have my own hallway and bathroom (because every girl needs five stalls, right?). 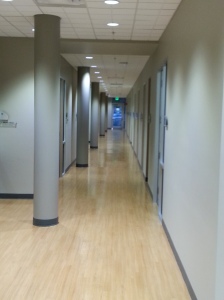 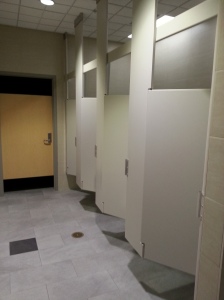 And all because it is the day before Thanksgiving and most of my fellow employees have taken the day off. Not me! I’m wearing jeans and Crocs (because my boss said I could) and working in an office that is mine, all mine, mine alone — at least for today. A cubicle among cubicles. 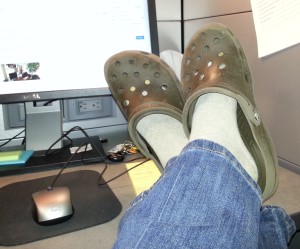 4 responses to “An office of one’s own…”