This is what my daughter posted to make the announcement of her first pregnancy Facebook official:

Since she posted it Sunday evening, she has gotten 61 comments and 121 likes — and I now have permission to make my announcement “blog official”: I’m going to be a grandmother!

(Which wasn’t true, by the way, but I thought it might be fun to say so, since Laura was so, so careful to tell her family and close friends face to face before posting it on Facebook.)

This sly girl sent me a text message a month ago, asking if she and her husband might come to watch the college football game with us. The game started after 7, which promised a late night for those who watched it, and I had to fly out of town the next morning at 6 a.m. Did I want to watch the game? Did I want to entertain? Not so much. And I said so.

But her father went out and bought hotdogs and potatoes — and suddenly entertaining would be easy. I could make potato salad in the morning, clean a little, pack a little, and enjoy my daughter and her husband (and Luther, their dog) all evening. So I reversed my dismissal and invited Laura and Jim (and Luther, after I got our cat’s permission). They all came.

As soon as possible, as I completed final preparations for the dinner, Laura followed me to the pantry pulled up her shirt and said, “Do you like my jeans?”

The maternity pants she showed me was her announcement to me. 🙂 My sweet baby girl was pregnant!

A few minutes later, she asked her brother if he was ready to be an uncle. (Her announcement to him.)

“No!” he said, and he made a face. But a few minutes later I shot this photo of him and his sister and sent it to my sister with this message: 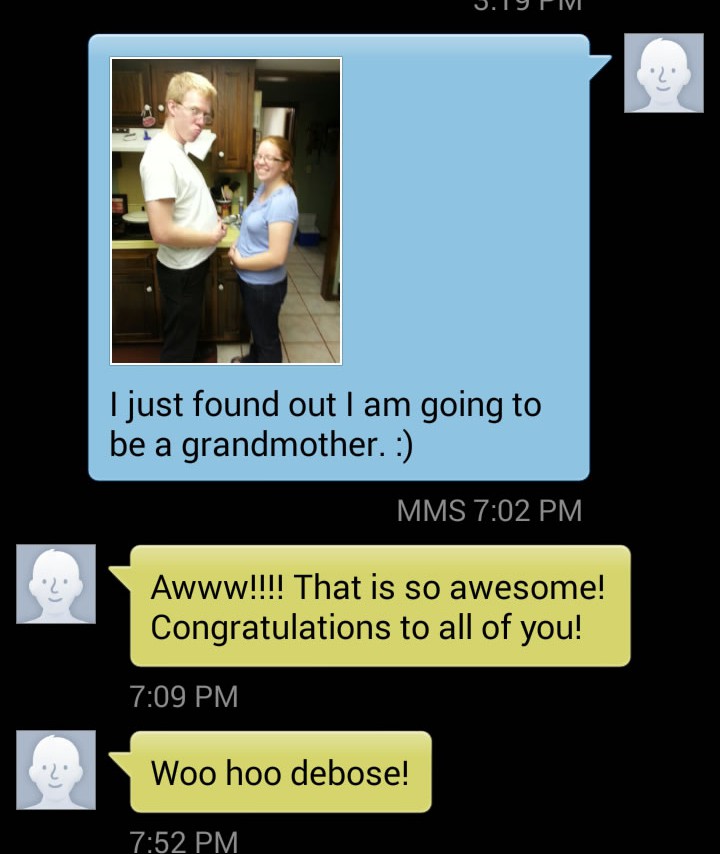 Apparently, she knew which child of mine was pregnant, despite my ambiguous photo. And my sister clearly went right on cheering the football team after her brief congratulatory message to me.

Laura found it a bit harder to share the news with her father — because our two husbands were conversing about politics and world events. How do you interject baby talk?

Finally, Laura just inserted herself into the conversation with:

“Dad, what do you want your grandchildren to call you?”

Politics and football were forgotten and joy was the evening’s theme.

But it does beg the question — at least for me — what do I want my grandchildren to call me? I am far too young to be called “Grandmom.” Right?