The power of a T-shirt… 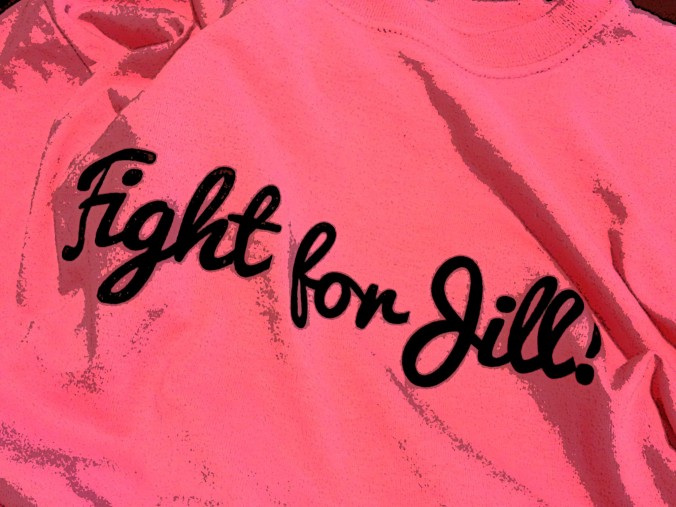 Which might be the reason wearing a bright pink, men’s large T-shirt with the message “Fight for Jill!” made such an impression.

One of my co-workers has Stage 4 breast cancer, and she is fighting for her life. Her second bout with the disease is far worse, far more extensive than her first fight four years ago. New to the office, I worked just a few days with Jill before her diagnosis, and she has been absent most days ever since. So I can’t say I really know her, although I have tried to stay updated on her battle: radiation, chemo, and a myriad of complications. She is obviously well loved by her co-workers who do know her well. Wanting to do something to show my support, I joined with others in my department by paying a small donation for a T-shirt. The goal was to collect money so she and her family could manage a family vacation before the treatments began, but doctors urged immediate medical action, and so that vacation is on hold.

When I got the T-shirt, I hung it on the wall near my desk, as I had noticed others doing — letting it remind me and others to think of Jill. Yesterday, I got the “FYI” email indicating that today was pink shirt day to encourage Jill, who is out of the hospital but feeling somewhat low. The plan was to send her a photo of our group in pink so she would know we were thinking of her.

I got dressed at the health club this morning, after a pre-work workout, and the T-shirt prompted questions from a variety of friends and new friends in the locker room. I shared what I knew of Jill’s story, and the women’s faces were displays of concern.

“So please pray,” I ended, “because that’s the only way I know to ‘fight for Jill.’”

Many concurred verbally that they would, and one woman got out her cell phone.

“My pastor told us about this app on Sunday,” she told me, holding her phone so I could see “Echo.” “You know how we say we’re going to pray and then often forget? This free app reminds me.”

I was so thankful to see her type in the prayer request.

As I was leaving the health club, I saw my son’s former basketball coach. He said, “Nice shirt,” and I was glad that hot pink in October, especially, communicates commitment to “breast cancer awareness.”  All I had to say was, “It’s for one of my co-workers. Please pray for Jill.” He said he would.

I was close to tears.  I left the health club, knowing I was fighting for Jill by raising up a small army of prayer warriors on her behalf and by remembering her in my own prayers. All day long, I was reminded of her need simply because I was wearing something comfortable, but out of my fashion comfort zone.

The T-shirt was larger than I thought — at least in its impact. Message received. I’m fighting for you, Jill.

4 responses to “The power of a T-shirt…”