It was the start of a good day. I’d exercised and mentally prepared for the day ahead of me, which included celebrating my husband’s birthday and our anniversary. But when I arrived at school yesterday, I realized I had accidentally left my cell phone in my van. In fact, I hadn’t had the phone on my person for about two hours by the time I was able to get to it.

And by then I was a half hour too late to do any good.

I noticed I had missed a phone call from my 17-year-old son. I figured I better call him immediately.

He was at school practicing with the choir, but he managed to answer the phone.

Then I noticed two text messages from Adam — and added my own. Thus began a series of frantic messaging (screenshot below). Though I added no punctuation, I was feeling some exclamation points along with my untyped question marks… 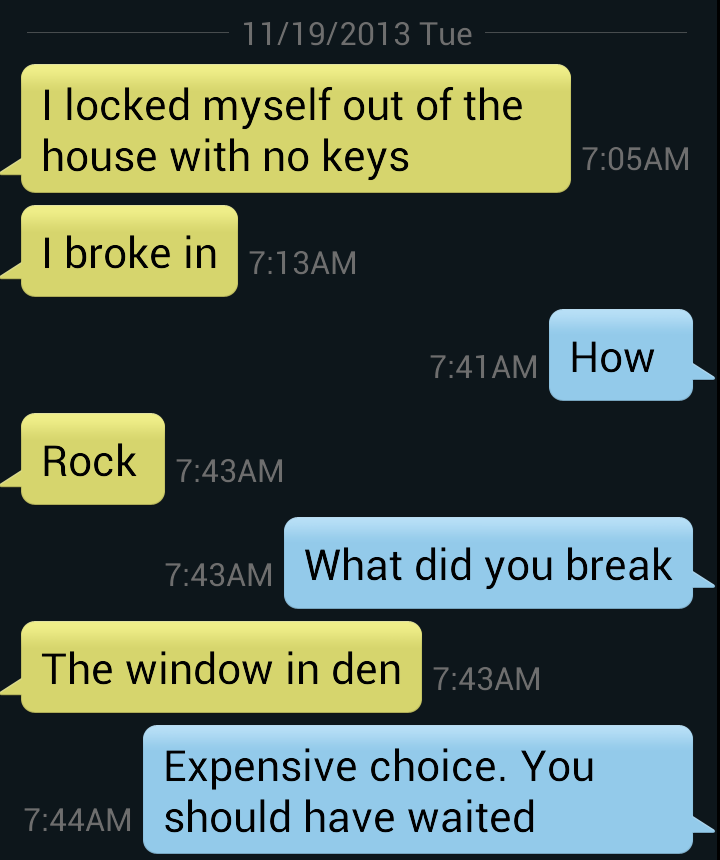 No period. No exclamation point. No expletive (of course).

All I could think was, “Not on my husband’s birthday!” I knew that Adam would have to pay for the broken window. I also knew that it would cost him a lot — and cost me a lot of time and aggravation. And that his father likely would add some punctuation to the conversation.

Sigh. This definitely had day-ruining potential. I thought of the second half of Matthew 6:34:

“Each day has enough trouble of its own.”

I was on drop-off duty, greeting secondary students as parents dropped them off in the circle near the school building, when a few minutes later that child of mine walked past — without saying a word.

“You need to check your text messages,” he said, as he tried to walk away, angrily.

The principal, who had been beside me during the texting and frustration earlier and offered truths such as “it’s just a window,” now said, “I’ll just walk away so you two can discuss this.”

“You need to check your text messages,” Adam said urgently.

“I mean you need to check your text messages NOW,” he said. And walked away.

He had sent a new one.

Seriously? I’d just been punked by my own son.

“Well, how did you get in?” I said, walking to him to continue the conversation he so obviously wanted to avoid.

“Let’s just say the house isn’t as break-in proof as Dad thinks. I got in through the window in the den.”

These are windows with strategic locks and blocks that prevent them from opening even a foot.

My son’s trouble for the day was also 6’3″ — his height and weight would make him a great football linebacker, by the looks of him.

How did he manage to get through the small gap in the window?

“I laid down, got my head in first, and then thrust the rest of me through. You should have seen the cat’s reaction!”

(I wish the cat had been videotaping it.) That might have been fun to watch.

I mentioned Adam’s “punk” to one of my colleagues, and she said his fit through that small space reminded her of a hamster’s ability to squeeze itself flat enough to fit under a door. (I found a video of a hamster that probably resembled my son yesterday.) For the rest of the day, she managed to fit “hamster” into every one of our conversations…

That mental image of my son — and the relief that a window wasn’t broken — made the day resume its brightness. I know my principal friend was right — it was just a window — but it was sure nice not having to deal with a broken one!

(And I do think I’ll keep my cell phone a little closer in the morning.)