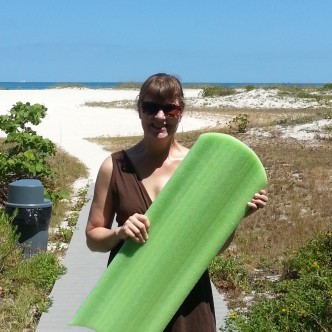 When my mother was first diagnosed with dementia, she had word-finding and organizational issues; now she has people-placing and event-remembering ones.

I spent a mere 20 minutes Sunday talking to my mother before she was called, early, to dinner at the memory-care facility where she lives. The first ten minutes of conversation were so muddied, I literally grabbed a pad of paper and a pen and started jotting notes, trying to piece together what my 81-year-old mother was saying.

The fragments and phrases I managed to jot onto the paper were generic and meaningless:

This is my mother, who made her living with words — as a journalist and talk-show host. Who spent a good 20 years (or so it seemed) earning college degrees after I, her youngest, went away to school. Who then taught religion and philosophy at the local college and Sunday school at church. Who lined her bookshelves with such an intellectual fare of books and teaching tapes that only a pastor would want them. Who was the consummate counselor to whomever needed her at the moment. Godly. Wise. Wordy. (So wordy we avoided asking her to pray before meals because the food would get cold.) My mom is this woman. A woman now at a loss for words — and losing so much more.

When I asked her if she had gone to church that morning, she said she was so happy that she “got there and sat in the last couple of rows” (as if she had driven herself; she has not driven in years… and she usually sits near the front with my brother and his family). She then rambled about the state of the church using terms such as “generally speaking,” “things are turning with care,” “quite a bit to be done but it’s good,” and “trying to catch a balance.”

I had no idea what she meant and so tried an easier subject.

“Did you see Jack today?”

“Oh, yes, he gave me a hug; he was so glad to see us,” she practically glowed through the phone. “He and that kind of thing were going out in the wilderness, but they will be back early this week. He was thrilled to pieces to see me and the rest of the family.”

This didn’t sound right, but I wasn’t sure. So I broached a subject I knew.

“Do you remember me being there last weekend?”

“No, not really,” she admitted.

I told her I’d been there, that I’d seen her new facility for the first time, that she and I had walked around it, and that she had introduced me to her friends. Then she briefly got real. Lucid. Honest.

“That’s the problem,” Mom said. “I can’t remember names or what’s happened. I can’t even tell if I am talking to someone I know or have just met. I am very careful to listen tightly so I can get in line with the conversation, to understand the background and history.”

“Do you mean at your facility or at church?”

“Everywhere,” she admitted. “I am not able to make an identification; it is just impossible for me to. So I try to be polite and pretend to remember.”

I spent the next few minutes encouraging her to just be Barbara.

“Everybody I met last weekend said to me, ‘Your mom is so sweet’ or ‘so encouraging,’ ” I told her. “Just be Barbara.”

For one, I said, the other people where you live are likely having the same problem, and the people at church are aware of your memory issue.

“Stop worrying about offending someone by not remembering them. I have never met anyone who did not like Barbara. Just be yourself. Be polite. Be friendly. Be honest.”

When my mom enters a place or situation that seems new to her, she acts absolutely delighted, not afraid or confused. Sometimes, she tries to cover herself, realizing she should recognize a place, and then she almost always blunders her way through, “remembering,” usually incorrectly, much more than she would even if she were actually remembering. She does the same with people, and I was relieved that she had finally admitted to it.

My mother seemed so encouraged, relieved even. I was glad I had talked with her. I hope that she remembers to relax and be herself, even if she doesn’t remember this actual conversation.

As I prepared to say my goodbye, my mom began her usual refrain.

“I know I’m being selfish,” she said, and I knew she already was thinking it had been months or years, not a mere week, since she’d seen me. “I want to see you, but I know you are doing good things. So when it’s convenient …”

Then, as if realizing we had been on the phone for hours, rather than 20 minutes, she said.

Four hours later, as my husband and I prepared for a good night’s sleep, we talked about my phone conversation with my mom. My dear husband is a physical therapist who works with geriatric patients and is familiar with the trials of dementia patients.

“… and so I told her to just be Barbara,” I proudly told my husband.

“That’s the problem,” he said, “she’s losing Barbara. She is losing the parts of her memory that help her remember even herself. Can you imagine how frightening it must be to not even know who you are or where you are?”

I will never understand this disease.