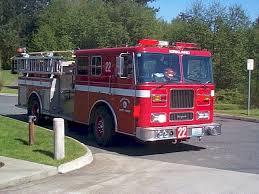 Sunday, halfway through my pastor’s sermon titled “Get Going,” we obeyed. The entire congregation got up and left.

Apparently, moments before, a child had pulled the fire alarm, and lights flashed, an alarm sounded, and a computerized voice repeated, “An emergency is occurring in this building. Please find the nearest exit and leave.”

Since we sensed no danger, we looked to our leader for instruction, and an elder opened the door and explained why it was not a true emergency. We regained our seats. The sound crew then upped the pastor’s microphone and he attempted to finish the sermon above the alarming, flashy refrain–momentarily. The music leader quickly interrupted to say the church would be ticketed if we did not exit the building immediately. We headed for the parking lot.

By the time the fire truck arrived, the congregation for the second service was arriving, and our pastor really told us early birds to “get going,” that we could catch the end of the sermon online tomorrow. His message, indeed, was the final in a series he called “The Four H Club,” and this message was both about sharing the Gospel with unbelievers and sharing fellowship with believers. We missed sharing fellowship but left knowing we were to share the Gospel, and he pointed out the morning’s irony in his use of Acts 8:4, “Those who had been scattered preached the word wherever they went” (NIV). The early Church had been scattered by persecution; our early churchgoers had been scattered by an errant fire alarm.

But whole sermon or just half, we left knowing that our job was to go and make disciples of all nations and teach them to obey everything God has commanded us (Matthew 28:19-20).

I left wondering if I was doing that. Inherent in my job as a teacher at a Christian school is sharing the Gospel and, at least, encouraging disciples through the Word of God and prayer–but is the Gospel, a.k.a. the “Good News,” really news to those I teach? Most of my students come from Christian homes; all of my students and their families go through an interview process before being granted acceptance. I often presume that all have heard and are in relationship with Jesus Christ. But year after year I hear of a teen I teach becoming a Christian, usually through the ministry of a local youth group.

Am I missing the opportunity to help lead those teens to Christ because I assume they already know Him? Am I failing to openly share the Gospel, the Good News, because I wrongfully assume all have heard? I am often privy to information regarding the social lives of these teens because I overhear tidbits of conversations while driving teams or even in the classroom. That information often alarms me–and alerts me that not all know Jesus or walk closely with Him. And yet I can’t remember the last time I actively shared the Gospel with anyone.

As a college student, I was involved with Campus Crusade for Christ, where I learned to approach perfect strangers and walk through the Four Spiritual Laws with them in an engaging and intelligent manner. I used to tell people that they were so lucky they knew me–because they would get to hear the Gospel. Scripture tells me to be ready at all times to share the hope that is within me (1 Peter 3:15). I was, but somewhere along the way, I lost the hope myself.

Not that I lost my salvation, but I lost sight of the fact that my salvation was hope. I saw it as hard. It seemed that the closer I got to Jesus and the more I served Him, the harder life got. It was almost as if by seeking Jesus, I was setting off alarms in fiery Hell, alerting Satan: “An emergency is occurring on planet Earth. Sara is drawing closer to Jesus and, thus, sharing the Gospel and making disciples. Please find the nearest method to discourage her.”

Think of Job. If he hadn’t been living so righteously, Satan wouldn’t have taken notice of him. Why would I invite others to join me in a life that’s hard?

The big distresses–the death of my first husband, the surprising difficulties involved with marrying a widower with four children, actually just raising any children at all–drove me closer to Jesus. How could I handle life without the hope He gives? I don’t want anymore of those episodes, trust me. But the discouragements of the daily grind, the disappointments of life, the day-in and day-out challenges, and the disturbing sense of personal failure and incompetency don’t drive me to Jesus; they drive me down. I think if I can fly under Satan’s radar and live enough like a Christian to please God but not sound the alarm in Hell, life might get easier.

It doesn’t. It just keeps me from being the Christian God calls me to be–and it keeps others from hearing from my lips the hope that truly is in Christ Jesus.

We live in a world that is increasingly hostile to the things of God. We live among people who see life so differently that we live aghast at their misperception.  The fact of the matter is, they can’t help it. How can they change if we don’t open our mouths, share the Good News, and watch God transform their sight?

I heard a little analogy one time about a non-Christian who was reading the Bible and saying that none of it made sense. A Christian replied, “That’s because you’re reading someone else’s mail.” We’ve got to share the Gospel so more people own the inbox!

The short Gospel is this: The Old Testament depicts the creation of man in God’s image; He is an eternal being, and so are we. The Old Testament then outlines the law and tells us how we should live, while telling us all about the failures of those who tried. Failing to live up to the law is sin. Sin earns a death penalty. The death penalty is eternal.

But the Old Testament also prophesied of One who would come and fulfill the law–and make salvation by a God who loves us more than we can imagine possible for us all.

That One, of course, is Jesus Christ.  The New Testament reveals him as the One who fulfilled all the prophesies and who not only lived the way outlined by the law but died anyway–on behalf of everyone else who wanted to claim his death as their payment for sin. Jesus not only died, but He rose from the dead. That was when he gathered his disciples together and gave them the command to “go and make disciples of all nations.” He also gave them the comfort that as they followed His commands, he would be with them (Matthew 28:19-20).

I don’t know about you, but I want that comfort His presence gives and the joy that comes from seeing others come to know Him. I want to follow His commands and “go and make disciples of all nations,” starting with my family, my students, and my little world around me. And if that sends off alarms in Hell, so be it. I am going to obey what my pastor’s abbreviated sermon said Sunday, “Get Going.”

Won’t you join me?

2 responses to “Go and make disciples…”